The development of Gas Network Codes, which has proved to be a key success factor in the development of successful, open, transparent and competitive gas markets throughout the world, is an area where the MJMEnergy has extensive experience to offer its clients. Having initially worked on the U.K. Network Code the MJMEnergy team has worked on projects throughout the world and are therefore able to offer clients the following services;

The following are some examples of our work undertaken in this area.

Albania is today, along with Montenegro and Kosovo, the only country in continental Europe, not linked to interstate gas transmission systems and has a completely isolated and underdeveloped national gas distribution system. Therefore, despite the fact that Albania currently has no significant natural gas production the development of the Trans-Adriatic Pipeline (TAP), with its ability to transport natural gas from the Shah Deniz II field in Azerbaijan through Greece and Albania to southern Italy, will in the future provide a potential source of gas for Albania allowing it to develop its own gas network infrastructure and gas market.

Therefore, as part of a wider capacity building project MJMEnergy provided advice and support to Albgaz in the following areas;

The development of the Albanian Gas Network Code – This was achieved by the Project Team working steadily and systematically with the Albgaz team to explain and refine each section of the Code to work within the context of the potentially developing Albanian gas network. Not only were the Project Team developing a Code for Albania they were also building capacity in Albgaz. 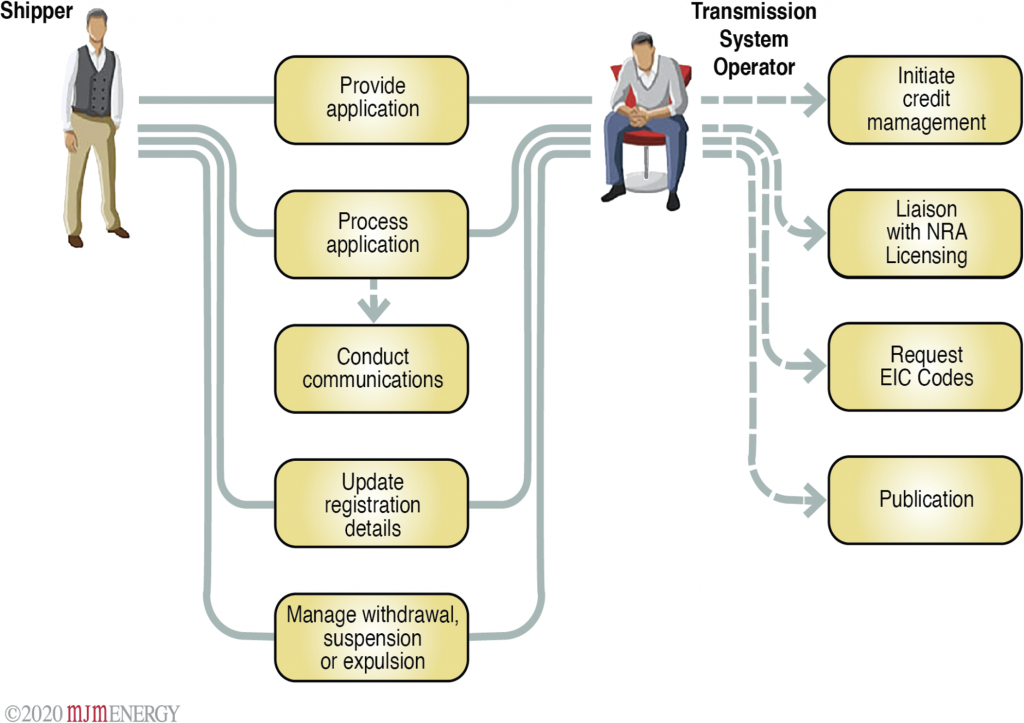 General capacity building for Albgaz the new TSO for Albania – In addition to providing consultancy support and capacity building throughout the project, the Project Team also provided a series of capacity building workshops covering a variety of subjects including energy balancing, nominations, capacity trading and energy trading.

This project was led by ECA (UK-based economic consultancy) and was funded by the EBRD, with MJMEnergy providing the technical and commercial expertise in relation to gas pipelines, gas networks and associated Gas Network Codes.

The West African Gas Pipeline (WAGP), owned and operated by WAPCo, is a 678 km long natural gas pipeline linking into the existing Escravos-Lagos pipeline at the Nigeria Gas Company’s (NGC) Itoki Natural Gas Export Terminal to Takoradi, in Ghana, with gas delivery exit points in Cotonou (Benin), Lome (Togo), and Tema and Takoradi (both in Ghana). The WAGP was initially designed to carry a volume of 170,000 MMBTU/d and peak over time with added compression up to a capacity of 474 MMBTU/d.

There were plans to create an entry point at Takoradi to receive gas from the Ghana pipeline system for onward delivery to Tema. This project was also developed to increase the Tema offtake capacity initially to 140 MMBTU/d and anticipated be by the end of 2019 to eventually top 235 MMBtu/d. The current gas booking system has been fraught with challenges in that, although there is a capacity booking system on paper, in reality the pipeline operates on a physical volumes delivery system, against all expectations.

Once the entry point at Takoradi is fully operational, WAGP will move to an entry-exit system of capacity booking and tariffs, away from the current point-to-point capacity booking and postage stamp tariff system. Thus, the physical volumes billing system was expected to discontinue once the Entry-Exit System commences.

Prior to commencement of this Project there was an existing Access Code based on the single entry, multiple offtake pipeline system using point-to-point transportation. However, with the move to an Entry/Exit regime, the old Access Code was no longer fit for purpose and needed to be replaced by a new Access Code which, for clarity, the Project Team called “the WAGP-Network Code”.

Overview report on developing the WAGP-Network Code – MJMEnergy prepared a first draft of a detailed outline of what the WAGP Network Code would cover, including the detailed processes in respect of the key elements of the Code. This was then submitted to WAPCo and WAGPA for review and comments. This report covered a variety of topics including balancing inputs and offtakes in a fair manner; how gas is measured and allocated to shippers; the capacity regime; tariffs and associated structure; and how and when shippers can submit and change nominations.

At the completion of this project MJMEnergy provided a number of conclusions. These centred around the need for discussion and debate on the requirements of the WAGP Network Code within the contractual and regulatory framework set out by the Project Team. A number of issues which would need further discussion were identified including the following:

In addition, a number of recommendations were provided covering areas including:

As a country that has had extensive supplies of natural gas, Pakistan has developed an extensive gas transmission network as well as localised gas distribution systems within all the country’s major cities. In its current state, Pakistan’s gas sector is bundled, with two integrated Transmission and Distribution (T&D) merchant pipeline monopolies selling gas to customers. With each of these businesses being responsible for a separate geographical jurisdiction. For example, Sui Northern Gas Pipelines Limited (SNGPL) serves customers within provinces in North Pakistan (KP and Punjab) and Sui Southern Gas Company Limited (SSGCL) serves customers within provinces in South Pakistan (Baluchistan and Singh). In addition to being monopoly transporters and sellers of gas, the Sui companies are also monopsony buyers of gas, since Pakistan’s E&P (Exploration and Production) companies must first offer to sell gas to SNGPL or SSGCL rather than directly to consumers (unless a consumer requires large amounts of gas). Unfortunately, a combination of rising gas demand, declining indigenous gas supplies and regulated end-user prices has not served Pakistan’s gas consumers well, creating a growing supply/demand deficit that has resulted in extensive curtailment of supplies. In particular the current structure of the sector (as shown above) has acted as a barrier to new gas supplies.

In an effort to overcome the uneven balance between supply and demand, the Government of Pakistan (GoP) had investigated possible options to bring gas into the country. This came in the form of LNG imports and construction of LNG terminals which, by 2018, were predicted to bring Pakistan’s total installed capacity to approximately 2,000 MMSCF/d. The influx of higher-priced, imported natural gas highlighted the urgent need for gas sector reform. It is our understanding that under plans by MPNR, Pakistan’s gas sector needs to undergo three main structural changes as follows:

Overiew of the Project

This Project formed part of a wider project of technical, commercial and regulatory support provided by the World Bank to MPNR/OGRA and the wider energy community in order to support the gas market reform process. As part of this, MJMEnergy provided support to MPNR, OGRA, and other stakeholders in Pakistan’s gas sector in the following areas:

Technical inputs to finalising of licenses by OGRA – MJMEnergy reviewed and analysed the proposed changes to the licensing regime for Transmission, Distribution and Sale. As part of this, the Project Team provided commentary on proposed fine tuning of the licenses to harmonise with the TPA Rules, GTAs and NWC.

Updating TPA Rules and harmonisation of GTAs – The consultant shall gain a thorough understanding of the draft revised TPA Rules 2017, the earlier set having been largely suspended. The revised TPA Rules are a set of high-level requirements, intended to be complemented by a Network Code. MJMEnergy provided a commentary on versions of the TPA Rules as they were fine tuned to harmonise with the licensing and tariff regime, and with the draft NWC and prepared specific issues notes to both explain and expand upon some aspect of the Rules.

Preparation of Network Code –MJMEnergy gained a thorough understanding of the stakeholders who have an interest in the NWC. This included the TPA Working Group, consisting of MPNR, OGRA, SSGCL, SNGPL, and the legal, tariff and advisory team from the World Bank. The GTA was then reviewed as a starting point for the development of a more comprehensive standard set of terms and conditions for gas transportation a Network Code. This included identifying issues and suggesting additional sections.

In many ways the process of reforming the gas market in Pakistan is an incremental on-going process, just like any other large monopoly market that evolves into a fully competitive market. Over the past few years, pipeline TPA Rules have been agreed, a gas Network Code published, capacity has been published and a small number of third party access transactions completed. While the gas market in Pakistan is still a long way from being fully competitive the foundation stones have been laid which could lead to full market opening in the future.

The Northern Ireland Authority for Utility Regulation (NIAUR) is a Non-Ministerial Government Department. It is not a policy-making department of government and its role is to ensure that the utility industries in Northern Ireland are regulated and developed within the strategic policy parameters determined by Ministers.

In 2011, Northern Ireland’s gas infrastructure was still under construction. With power generation as anchor-load, transmission lines had been constructed from Belfast to the North-West and from the border to the Belfast area. At the time, there were approximately 120,000 gas customers in Northern Ireland, mostly in the Greater Belfast area. With a fragmented gas industry, Northern Ireland’s regulators were engaged in a programme of work to design common arrangements for gas (CAG). The aim of these were to simplify system operation, strengthen supply security and provide a sound basis for future investments in gas infrastructure. 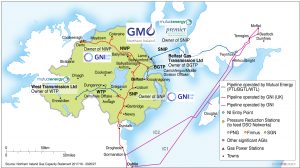 Overiew of the Project

MJMEnergy were engaged as specialist Network Code advisors to assist and support the Gas Directorate in providing advice on the development of a common energy market.

Areas covered throughout this project included a review of reports and documents produced by the various players on the Common Arrangements for Gas (CAG) project (a plan to integrate the Northern Ireland and Republic of Ireland gas systems), assistance in the development of policy in particular in relation to system operation, supply security and infrastructure investment.

Throughout this project MJMEnergy was able to prvoide ongoing support to its clients by providing insight and analysis on the impact of the network code on the energy market relating to the island of Ireland.