The existing gas market as well as any future hydrogen market will use high-pressure pipelines to deliver energy to consumers. Therefore through a combination of its own in-house expertise and international associates MJMEnergy has been able to provide consultancy support on pipelines and networks to its clients in the following areas:

The following are some examples of our work undertaken in this area.

The gas market in Indonesia is beginning to change – some would say has already changed. With a growing economy, Indonesia is experiencing corresponding growth in local gas demand, reversing Indonesia’s traditional role as a resource exporter. While LNG exports still provide a valuable source of income, domestic gas resources are increasingly seen as a valuable low carbon resource for the growing local economy. Therefore, in addition to Indonesia moving away from a strong LNG export orientation, there is also likely to be a greater utilisation of gas in the domestic market. Whilst Indonesia does still have significant gas reserves, future domestic gas production will come increasingly from more remote parts of Indonesia. In addition, the expectation is that overall domestic gas production is set to decline, with imported LNG supplying an increasing share of total domestic supply.

As the Indonesian gas market begins to change it has become clear that gas infrastructure is a chronic bottleneck to development of the domestic gas sector. If Indonesia is going to meet its rising demand for gas from a combination of indigenous supplies and LNG imports, then significant infrastructure investment will be required in a number of areas including LNG Terminals; the development of interconnected gas transmission systems; and the development of ‘virtual pipelines’.

Previous attempts to develop infrastructure such as via a ‘gas pipeline bid round’ failed to achieve its objectives. Therefore, a paradigm shift would be needed to take place in the way gas market infrastructure is owned, operated, developed and funded in order to link gas reserves with gas markets. In order to achieve this, it seems likely that an overhaul of the midstream institutional and regulatory framework will need to take place, which has been recognised by the Government as critical to the success of the Roadmap.

As an outcome of their dialogue with Government of Indonesia and other relevant stakeholders on potential developments throughout the gas chain in Indonesia, the World Bank required help to facilitate the development of an optimized plan for gas infrastructure development in Indonesia. Additionally, MJMEnergy were tasked with providing an integrated framework for investment and financing of gas infrastructure focusing on the following three areas.

Project implementation – In order to undertake this work MJMEnergy formed a bespoke Project Team made up from a combination of MJMEnergy internal staff, international associates and local partners in Indonesia.

Infrastructure Optimisation
MJMEnergy focussed on data analysis and forecasting, in order to determine how to optimise Indonesia’s existing (Image above) and proposed gas infrastructure and import facilities. In order to understand the capability of the Indonesia’s gas pipeline network the Project Team needed to identify the ownership, location, lengths, sizes and capacity of high-pressure pipelines in Indonesia. This was done in order to supply forecast gas demand, in the context of gas’ growing share of primary energy supply.

Investment Framework for Gas Infrastructure
MJMEnergy developed the investment framework for both state-owned enterprises (SOEs) and the private sector to ensure appropriate incentives are in place. This was done so that necessary infrastructure investments could be realised efficiently while minimising the risk to the Indonesian government and SOEs.

Review of Gas Infrastructure Planning Function
MJMEnergy led a review of the existing processes of infrastructure planning and approval, recommending improvements based on international best practice. In addition, the Project Team carried out a needs assessment of DG Migas to identify the expertise and organisational capacity it would need to carry out planning and oversight of infrastructure investment.

An analysis of the interaction (or lack of it) between the major pipeline asset owners – In addition to establishing the available capacity in different pipeline systems the Project Team also explored the potential benefits that might exist by connecting pipeline systems owned and operated by different stakeholders. The Project Team then undertook a financial analysis of the potential savings that might be achieved by developing a single gas pipeline network serving the main Indonesian islands of Java and Sumatra, from a combination of pipeline upgrading, interconnection and movement from single Point-to-Point pipelines to a fully integrated network.

Based on the analysis undertaken throughout this Project, MJMEnergy were able to draw the following conclusions and make recommendations in relation to the planning process associated with Indonesia’s gas industry:

Based on these conclusions, the Project Team provided a series of recommendations to act as a starting point for developing Indonesia’s gas infrastructure. These included:

Senegal has a small but growing electricity system, which currently has 1,000 MW of installed capacity, consisting of mainly HFO-fired power stations plus some solar, wind and coal, with IPPs having a growing role. While there are currently no gas-fired power plants in Senegal, around 500 MW of capacity consisting of three HFO-fired reciprocating engines and a new greenfield power project could be converted to gas should it become available at competitive prices.

Fortunately, the Republic of Senegal is in the process of developing significant offshore hydrocarbon discoveries that should result in the delivery of pipeline gas to Senegal’s domestic gas market over the coming years. This will potentially involve deliveries of gas from three locations: the Sangomar oil and gas field (Cairn and Woodside) in the South (2023), an initial allocation of 35 mmscfd in the north when the Tortue gas field (BP and Kosmos) comes on stream, and potentially supplies from the central offshore location of the Yaakar field which is currently being appraised by BP and could be targeted for domestic supply. 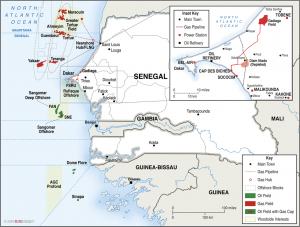 Against this backdrop of developing hydrocarbon reserves, growing power demand, and the environmental and financial benefits of displacing HFO with gas, MJMEnergy assisted the IFC and the Government of Senegal on certain elements of the country’s gas-to-power strategy, in particular: 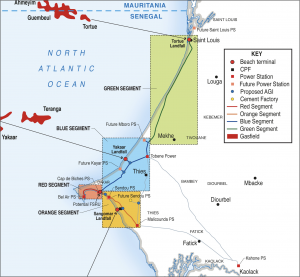 Institutional Design and Business Planning – As the next phase in the Project, the Project Team undertook the design of a new, public-private gas network company (given the working title of “PipeCo”) that would be established to own and operate this system. The Project Team focussed on:

The Project Team were able to conclude the following in relation to Senegal:

This work was part of a larger project funded by the World Bank and led by ECA which involved an exploration of the commercial viability of the Ionian-Adriatic Pipeline (IAP). MJMEnergy’s role involved the technical and commercial aspects of high-pressure gas pipeline design, operation and costing. In particular the work involved a review of the technical and cost estimate elements of the IAP report, focusing on the pipeline route and the associated technical aspects of the pipeline.

Review of the pipeline route – Although an optimised pipeline route had been suggested, each country was free to determine the actual route through its territory, therefore the MJMEnergy Project Team needed to explore whether any of these routes posed additional complications to the pipeline project resulting in a longer more expensive pipeline. 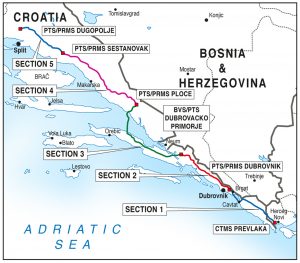 Each section of the IAP was reviewed, in relation to the chosen route, terrain, river, road and rail crossings. In addition, other design aspects of the pipeline were examined and tested against existing pipeline design standards such as proximity issues, and subsea sections. In particular the Project Team identified a number of highly mountainous areas on the chosen route which did not appear to have been fully been appreciated in the design and cost estimates. Also the Project Team did recommend the use of up to date satellite imagery in order to enhance the granularity of the pipeline design process.

Technical characteristics and requirements of the pipeline – The MJMEnergy Project Team were also required to assess the general the design of the IAP in relation to the proposed flows, although it was recognised that these flows may be ambitious the design was sufficiently robust to accommodate them if realised.

The Project Team also explored how the pipeline development might be phased to minimise CAPEX and throughout risk. For example starting with building the pipeline initially, and then adding gas compression and potentially reverse flow capability at later stages as required.

The MJMEnergy concluded its contribution to the project by presenting a report that covered the following areas.
Lebanon Gas Development

This work was part of a larger project  led by ECA for the Lebanese Petroleum Administration (LPA) in relation to the Lebanon Gas Development Plan. MJMEnergy’s contribution was in relation to the technical and commercial analysis of a number of different gas supply options using a combination of gas pipeline and LNG import infrastructure.

Review of the various gas supply options – MJMEnergy were required to analyse and compare various different infrastructure scenarios using different combinations of onshore and offshore gas pipelines with a variety of LNG supply options. One example is shown below. 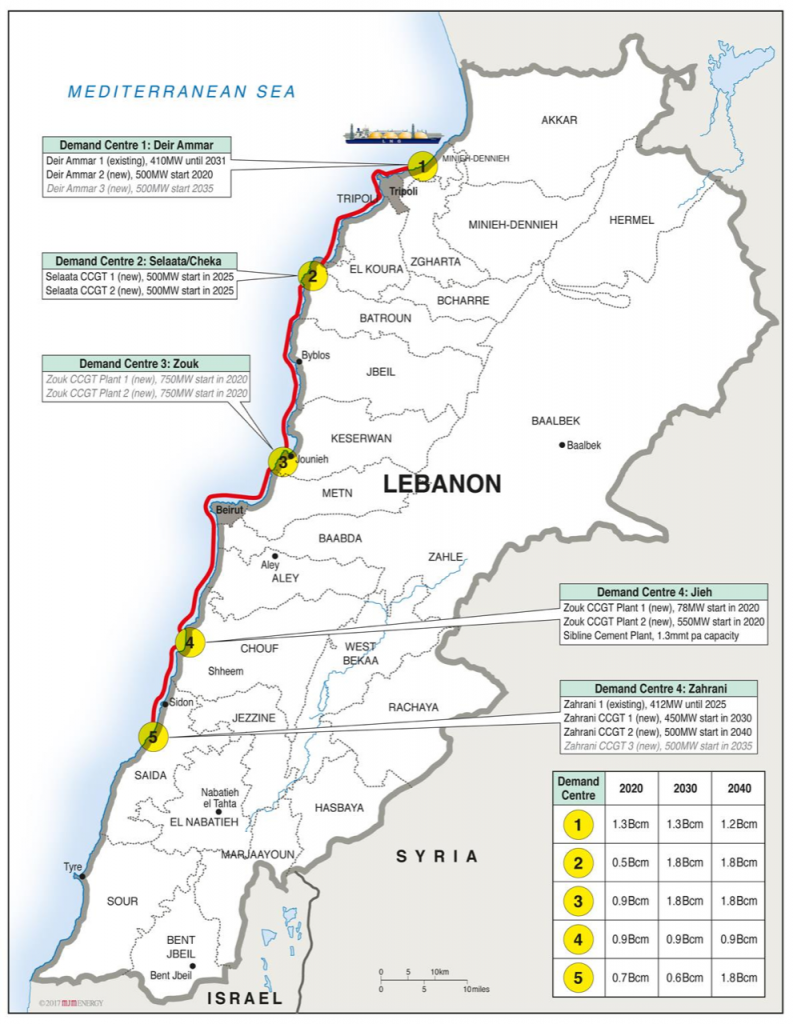 In undertaking the analysis of the five scenarios, the following technical parameters needed to be taken into account.

Finally, we also looked at how gas developments in the region could be future proofed, especially in terms of delays in the development of indigenous gas.

Development of a diverse Project Team – In order to undertake this work MJMEnergy needed to develop a bespoke Project Team led by Mike Madden with support from international pipeline and LNG infrastructure experts.

The MJMEnergy concluded its contribution to the project by presenting a report that explored the cost, capacity and flexibility of the various scenarios ultimately identifying the cost of the various infrastructure options in $/MMBTU.